Few books stand the test of time. George Gilder’s “Sexual Suicide” is one of them. Tweet

“The prime fact of life is the sexual superiority of women.”

“In a world were women do not say no, the man is never forced settle down and make serious choices.”

“Marriage is not simply a ratification of existing love. It’s the conversion of that love into biological and social continuity.” 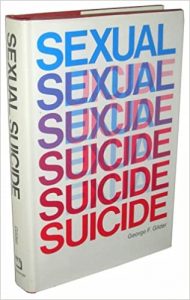 ew books stand the test of time. George Gilder’s Sexual Suicide is one of them.

True, some of us experienced sexual suicide in our teens. This book is more positive— or at least more useful— than anything you learned in adolescence, despite its title.

“The differences of the sexes are single, most important fact of human society.”

“For it is only their masculinity, their sexual nature, that draws men into marriage and family responsibilities.”

“When our social institutions deny or disrespect the basic terms of male nature, masculinity makes men enemies of family and society.”

“The crucial process of civilization is the subordination of male, sexual impulses and biology to the long-term horizons of female sociality.”

“Men lust, but they know not what for; they wander and lose track of a goal; they fight and compete, but they forget the prize; they spread their seed but spurn the seasons of growth; they chase power and glory but miss the meaning of life.”

“‘Naked Nomads’—unmarried men—‘march to the beat of the hunt and the battle.’”

“Unless they are brought to heal, they rape and pillage, debauch and despoil the settlements of society.”

“If children lack close attention of mothers and the disciplines and guidance of fathers, they tend to become barbarians or wastrels who burden or threaten society rather than do it work.”

“Monogamy is egalitarianism in the realm of love.”

“Monogamy is designed to minimize the effect of sexual inequalities—to prevent the powerful of either sex from disrupting the family order.”

Solution to Sexual and Social Suicide:

“The prime fact of life is the sexual superiority of women.”

“Men will only own up to their paternal obligations when women lead them to do so.”

“In a world were women do not say no, the man is never forced to settle down and make serious choices.”

“Marriage is not simply a ratification of existing love. It’s the conversion of that love into biological and social continuity.”

“‘Give and you will be given unto.’ It is the obvious message of motherhood. But societies thrive only to the extent that maternal wisdom becomes the faith of fathers.”

Buy it below. The darkness we are living through presently—not only for men, but for women and children as well—is the unintended-but-necessary consequence of the imposition of a once-upon-a-time idea of the sexes and their relations. Gilder saw clearly at dawn the darkness that is our moment in time—as well as the darkness that will follow if we do nothing.

Buy it
book
Life After Google: The Fall of Big Data and the Rise of the Blockchain Economy

Buy it
book
Wealth and Poverty: A New Edition for the Twenty-First Century

Even If You’re Not in Sales, You’re in Sales
Is “Karen” the new C-word?
Where Bill Gates Blew it
Comedian Bill Burr to Receive Lenny Bruce Award