The Ultimate Dutchie of a Drug Book

The ultimate dutchie of a drug book: take a page and pass it on. Tweet

Everything we ever wanted to know about drugs and their effects but were afraid to ask.

The title is a conversation starter. You could learn something about your family and friends, just by watching them look at it.

Dr. Hart makes a compelling case that thinking improperly or sensationally about drugs has a disparate impact on black and brown American men.

What do you do when a super-credentialed research scientist writes a positive book on the pursuit of pleasure? You buy it, hold its words deep in your brain—then exhale. And if you like it, you tell your friends. 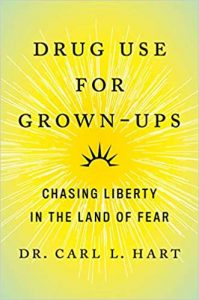 Leave the book on your coffee table, and see what happens. The title might be a conversation starter between guests. You could learn something about your family and friends, just by watching them look at it. They might turn out to be cooler than you thought.

Ziff Professor at Columbia University and former Chair of the Department of Psychology Dr. Carl L. Hart’s Drug Use for Grown Ups: Chasing Liberty in the Land of Fear is a game changer in the planned-and-manly pursuit of pleasure. This book is reformational in its ambition and courage, in a world that exists on government grants.

Hart dispensed and studied the effects of every drug you might have tried, heard of or even considered taking—weed, cocaine, amphetamines, all the club drugs—as well as old-school stuff like psychedelics, crack and heroin.

Self-tested: Doc Carl has tried (recreationally) the drugs he administered to his clinical subjects. (If not all the variants, at least the chemical root from whence they sprang.)

Hart’s book is comparable to a chemistry class on the mixing of molecules in service to mankind’s relief and recreational pursuits, as he shares what the drug did for him (with the nuance of a Robert Parker). He pairs every drug with a moody song that speaks to the pharmaceuticals’ soul—much like a sommelier—as well as a correlating, policy reform that could mitigate the problems of addiction if we had the courage to think differently.

Persuasion in every puff. Drug Use for Adults is a Pulitzer Prize-worthy example of academic advocacy’s persuasiveness. The scientific method is front and center on every page of this argued and deeply felt book.

The bigger idea at work in this book—above conveying all we ever wanted to know about drugs and their effects but were afraid to ask—is the grown-up truth about whether drugs will set black men free. Dr. Hart makes a compelling case that thinking improperly or sensationally about drugs has a disparate impact on black and brown American men. What’s the difference between cocaine and crack? Nothing, chemically. But if you get caught selling crack, your prison sentence is 18-times greater than cocaine—doesn’t seem fair.

Thinking like a grown up on drugs has civil-rights consequences.  The good Dr. Hart “Has a Dream,” and PM will put its shoulder behind getting to the Promised Land.

This book has miles to go before finding its deserved, print run. But Drug Use for Grown-Ups… is a principled shovel for anyone who lies to their doctors, pollsters, colleagues and loved ones. It provides a great defense for the planned pursuit of pleasure.

Buy it
book
High Price: A Neuroscientist’s Journey of Self-Discovery That Challenges Everything You Know About Drugs and Society (P.S.)

Buy it
book
Drug Use for Grown-Ups: Chasing Liberty in the Land of Fear

Diversity and Tolerance Properly Understood and Pursued
Rules By the Dozen
Sexual Suicide
The Guy List: Dr. Carl Hart, author of Drug Use for Grown-Ups