When I say “Gale Sayers,” whose song do you think of?

"I love Brian Piccolo, and I'd like all of you to love him, too. And tonight, when you hit your knees, please ask God to love him." - Gale Sayers Tweet

'Brian's Song' was a 1971 ABC Movie of the Week and it's often considered one of the greatest TV movies of all time.

It's also a true story, based on the book by Chicago Bears running back Gale Sayers.

I use the friendship of Gayle Sayers and Brian Piccolo as the standard for friendships.

I don’t know about you, but I’ve seen it at least ten times.

And everytime I’m caught in the middle of a particularly tragic or dramatic moment in my life, I feel like the world around me goes into slow-mo and the haunting theme song from Brian’s Song starts playing in the back of my head.

And I don’t think it’s just me.

If you don’t already know, Brian’s Song was a 1971 ABC Movie of the Week and it’s often considered one of the greatest TV movies of all time.

It’s also considered to be one of the greatest sports films ever made.

To be more specific, it’s a football movie, a buddy movie, and a real tear-jerker of a movie — especially for men. 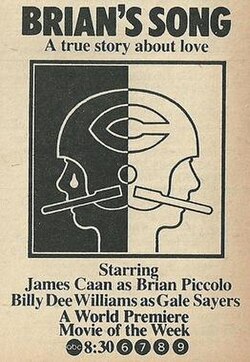 And here are two spoiler alerts you need to know to better understand why this is considered one of the greatest sports films ever:

I can’t speak for all men, but I can tell you that to this day I continue use the friendship of Gayle Sayers and Brian Piccolo as the standard by which to judge the quality of my friendships with other guys.

Legrand: The hands of time (from “Brian’s Song”)
Buy it
SIGN UP FOR THE BEST OF PlannedMan.com

Where is Gambling Legal in the U.S.?

Feminine Thought is Not of One Mind.

‘Spaceman’ to MLB: Stop Screwing Around with the Game

10 Ways to Move Out of Frat Life