The Sopranos: Maybe it was all about “those goddamn ducks.”

so angry, so entitled, so violent...and yet so loyal... Tony Soprano Tweet

The Sopranos premiered on HBO in 1999. The show won 16 Emmys that year.

The last episode aired in 2011 and the star, James Gandolfini died of a heart attack in 2013. 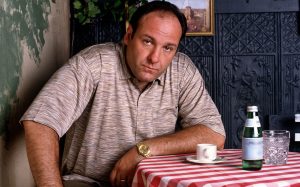 I don’t know about you, but I watched week after week marvelling at this character — so angry, so entitled, so violent…and yet so loyal.

That’s me, I would think to myself.

Inside, I am often burning up and full of rage.

And inside, I know I deserve better than what I’ve got.

And inside, I am barely able to keep a lid on my urge to put a bullet in the side of your head.

But unlike Tony, I do keep lid on it; but only because I really have no choice.

Yet, given a choice the way Tony Soprano has a choice, I just might let the rage inside me out.

And I don’t think it’s just me; I think lots of people watch The Sopranos and feel the same way.

Just as Tony was in therapy (“Those goddamn ducks”), watching The Sopranos is like therapy for me.

Yeah, I am filled with rage and I know I deserve better and there’s a part of me that believes that just a little violence will eliminate whatever problem is pissing me off today; but I also see what a mess Tony’s life is, so I take a deep breath, and I turn off the TV.

And that’s where the loyalty and the ducks come in.

A+
a-
The Sopranos

Buy it
streaming
Sopranos on HBO

Stream It
streaming
Sopranos on Hulu