Take your tax advice from a CPA-turned-Navy SEAL warrior

What do a Navy SEAL, a best-selling author, a college professor, a fitness guru, a brewery founder and an entrepreneur all have in common? They're all Mark Devine. Tweet

He was working as a CPA, but he couldn't find the right balance.

...so he became a US Navy SEAL, providing "transformational" personal and team training experiences.

Now he's an author, a yoga instructor and the head guy at his Unbeatable Mind Academy.

Oh, and a former CPA who was once a spreadsheet jockey for Coopers & Lybrand in New York City. 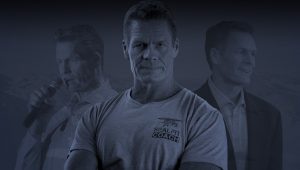 Four years and an MBA later, Mark walked away from his high-paying CPA gig to pursue his ambition to become a SEAL and get some balance in his life.

He was 26 when he graduated as honor-man (number-1 ranked trainee) of his SEAL BUD/s class 171, and served on active duty for nine years and in the reserves for eleven, retiring at the rank of Commander in 2011.

After leaving active duty in 1997, he started his second business career as an entrepreneur. He co-founded the successful Coronado Brewing Company and, in the year he left active duty, launched NavySEALs.com. NavySEALs.com is the leading web site for gear and information about the SEALs.

Then he started his company, US Tactical, gaining contracts with Naval Special Warfare Group ONE for training support, and the Navy Recruiting Command for a nationwide mentoring program for SEAL, SWCC, EOD and Diver candidates.

Mark’s business career was interrupted by a stint as an Adjunct Professor of Leadership at the University of San Diego, where he was pursuing his Doctorate in Leadership, and then by a one-year recall to active duty in 2004. The recall took him to Baghdad with SEAL Team One to conduct a special project for Naval Special Warfare Command surrounding the role of the USMC in Special Operations.

In 2007, he launched his CrossFit affiliate and the now internationally-known SEALFIT program to provide transformational personal and team training experiences. The training uses an integrated warrior-development model he developed — called Unbeatable Mind — which draws from his 20 years as a SEAL and business leader, 25 years as a martial artist and 15 years as yoga practitioner.

He says SEALFIT and Unbeatable Mind are uniquely effective at elevating clients to a higher level of operating, thinking and leading — encompassing the full spectrum of human experience — body, mind and spirit in self, team and organization.

One of Mark’s first books is Unbeatable Mind: Forge Resiliency and Mental Toughness to Succeed at an Elite Level, and we recommend it highly.

And if you really want to train yourself to be a warrior — and also get your butt kicked — make sure you check out Mark’s Unbeatable Mind Academy:

Unbeatable Mind: Forge Resiliency and Mental Toughness to Succeed at an Elite Level
Buy it

The WAY OF THE SEAL UPDATED AND EXPANDED EDITION: Think Like an Elite Warrior to Lead and Succeed
Buy it

8 Weeks to SEALFIT: A Navy SEAL’s Guide to Unconventional Training for Physical and Mental Toughness
Buy it

The Tambosi Effect: Using Ads to Inspire
Education ROI: Make your school put some skin in the game.

One Man’s Story: ‘I took a mulligan on …

‘Mike Mulligan and His Steam Shovel’

How to Negotiate with a Car Dealer