Visiting from Mars? Here Are the Nine Top Sports on Earth

On our planet, there are nine ways to become a millionaire superstar without messing with hedge funds. Tweet

Some of the richest people on our world dress funny, chase balls and pat each other's butts.

Sporting styles and traditions are how we tell one tribe from another, some more popular than others. Sorry, curling.

We all grow up believing our local team is the best in the world, only to be disabused of that notion when we can read well enough to understand what “W” and “L” mean in the standings.

With age and wisdom, we can begin to appreciate the beauty of sports beyond our local teams and even our national leagues, even if we don’t understand them all.

Here, in alphabetical order to avoid any debates over which sports should be listed first or sloughed off to last, are the nine most popular reasons for humans to gather in very large numbers and scream as loud as possible.

Baseball was invented in the U.S. and was once our most popular sport. It’s so ingrained in our history and culture that even dead guys come back to play in a cornfield:

So it’s no surprise that you’ll find the world’s top players in Major League Baseball, even though it’s no longer our national pastime. (That would be football.).

Before the pandemic, MLB drew almost 70 million fans a year. That’s by far the highest attendance for any sport in any country in the world, mostly thanks to the fact they play so many more games.

The National Basketball Association is the world’s fourth-richest sports league, third in the U.S. and tied with the NFL for ostentatious wokeness.

It’s also fourth in the world in total attendance, and third in the U.S., where it’s the only sport with a majority nonwhite audience. It also has the fewest female fans.

In part that’s because it’s a sport of extremes. The average NBA player is 6’6” tall, while the average American is just under 5’10”. There were only 25 players six feet tall or shorter in the 2020-21 season, and they got less than 5 percent of total playing time.

That’s why NBA teams search the world for talented tall people, and find them on every habitable continent.

Here’s the altitude survey by Dimitrije Curcic at RunRepeat.com:

We confess we know absolutely nothing about cricket, beyond the fact it was invented in England and is the most popular sport throughout much of the former British Empire and features positions such as “silly mid-off” and “silly dog-leg”. Also home runs are worth six somethings. Goals or points, maybe.

India’s Premier League, with an average attendance of 30,000 per game, ranks fifth in the world among outdoor team sports. The top pro leagues in Bangladesh and Australia also average more than 20,000 per match. Football is an extremely American sport. As pundit George Will once said, it’s “violence punctuated by committee meetings.”

No surprise, then, that it’s the most popular sport in the United States. National Football League games average 67,000 fans per game, which is the highest by far for any team sport in the world.

But you’ll find some of the most exciting games in college football. That’s where the game began, and where to this day you’ll find the biggest crowds and the most passionate rivalries. 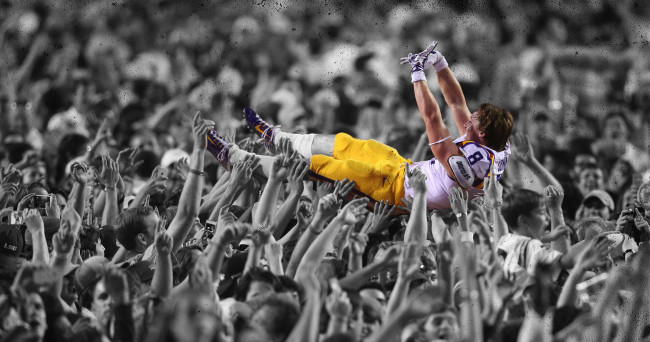 Golf doesn’t have leagues, but its four major tournaments—the Master’s, PGA, U.S. Open, and Open Championship (aka British Open)—draw the world’s top players and are among the most exciting competitions you can see.

If you want to pretend it’s a team sport, the biennial Ryder Cup pits a squad from the U.S. against one from Europe.

Hockey was invented in Canada, where it remains the country’s most popular sport. The National Hockey League, launched in Montreal in 1917, didn’t add its first American team, the Boston Bruins, until 1924.

But hockey has gone global. The NHL’s headquarters is now in New York, and only 25 of the league’s 32 teams are in the U.S. It has the fifth-highest revenue of any league in the world, and the third-highest total attendance.

Rugby, like cricket, originated in England, at Rugby School. Hence the name.

But unlike cricket, which is completely mystifying to sports fans outside the Commonwealth, rugby’s only somewhat mystifying. It looks familiar enough for fans of American football to follow the action even if you don’t understand the rules or why successful scoring plays are called “tries”.

The two systems evolved on separate tracks, with more action in rugby league—the ball is in play for 50 minutes in an 80-minute game—compared to about 35 minutes for rugby union.

The National Rugby League in Australia and New Zealand has the highest average attendance of any professional rugby circuit in the world.

Not only is soccer the world’s most popular sport, it’s the most popular in almost every individual country in Europe, Africa, the Middle East, Latin America, and much of Southeast Asia. No wonder they call it “football.”

But the best soccer leagues are in Europe, and it’s not even close. European teams attract the best players from every soccer-crazy country on the planet.

The English Premier League is the highest-ranked and most popular worldwide. To give you an idea of how deep the league is, its 20 teams have an average Soccer Power Index rating of 73.41. That’s higher than the SPI of the best team in any league outside Europe.

European soccer leagues, unlike those in the U.S., don’t have playoffs. Instead, the top teams across the continent go head to head in the UEFA Champions League, the pinnacle of competition for soccer clubs.

If you prefer seeing national teams, you can’t beat the FIFA World Cup. Staged every four years, that’s where you see all the great players from European leagues competing for their home countries. Every men’s World Cup champion has come from Europe or South America.

On the women’s side, the U.S. has won four of the first eight World Cups, with the others won by Germany (twice), Norway, and Japan.

Tennis is yet another sport invented in England, which hosts Wimbledon, the world’s most prestigious championship and the only one of the four Grand Slam tournaments to be played on grass courts.

But tennis is arguably the world’s most democratic sport, even though it’s not the most popular sport in any single country. The other three Grand Slam events are in France, Australia, and the U.S., with champions from 37 countries.

It’s also the only major spectator sport in which female players get nearly equal billing with the men, and are at least as likely to become household names.

“Sports Betting For Dummies” By Swain Scheps
Buy it

“Soccer IQ: Things That Smart Players Do, Vol. 1” By Dan Blank
Buy it

“Fantasy Football Unleashed…” By Holloway, Moore, and Wright
Buy it

The Game That Changed Pro Football
Buy it

“The Mental Game of Golf: A Guide to Peak Performance” By Patrick Cohn, PhD
Buy it

12 Things Every Man Needs In His Kitchen