How to cure a hangover? Yes, not drinking too much is one solution. But let's skip that one...and move on to some real cures for fun people who like to have real fun by really drinking a lot. Tweet

It's a wild and crazy world...and it all fits in one bottle.

Then comes the next day, which is just crazy painful.

When it comes to hangover cures, I’ve tried them all.

I’ve tried to soothe my aching head with greasy breakfasts and carb-loading. 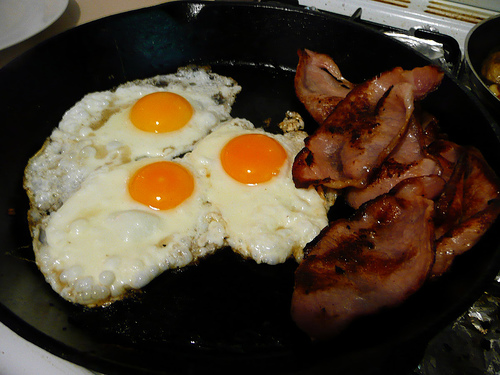 I’ve tried pickle juice and Alka-Seltzer, Advil and ramen, and that classic (if utterly ill-advised) staple, “hair of the dog,” which never made much sense to me. Getting over a hangover by drinking more always struck me as about as logical as recovering from a punch in the face by asking someone to punch you in the face.

The problem with hangovers is that they get worse as you get older. You’d think it’d be one of those things that our bodies would develop a natural defense over time. But no, just the opposite is true.

The problem with hangovers is that they get worse as you get older.

I’ve tried some truly weird cures, like rubbing a slice of lemon on the armpit of my “drinking arm,” which is an old Caribbean cure that some swear by but just left me feeling sticky and stupid. I’ve tried the dreaded “Prairie Oyster,” a concoction made with raw eggs, hot sauce, vinegar, Worcestershire sauce, salt, and pepper. It didn’t fix my hangover, as promised, but it did make my insides angrier at me than they were already.

Defying all sense of reason, I even submitted myself to the ridiculous Doritos hangover cure, which involves dipping Spicy Sweet Chili Doritos into sour cream. It did nothing but prove P. T. Barnum’s maxim, “There’s a sucker born every minute.”

I actually reached a point where I stopped believing a hangover cure was possible. (Other than, say, just not drinking so much booze, but that’s not happening.) There was no magical formula that undoes a night of bad alcohol decisions, any more than there’s a love potion that’ll make someone fall madly in love with you.

But then I stumbled upon this Thrillist article, in which I discovered the only hangover cure that you’ll ever need.

That’s because it’s not just a single hangover cure, but four hangover cures. Each of which kinda, sorta takes the sting out of a hangover if used on their own. But when put together, they mount a defense against the toxins coursing through your system that’s like a hangover-decimating blitzkrieg.

It’s called H.E.A.L., and it’s a four-step recipe for not just feeling like yourself again, but feeling pretty close to invincible.

H is for HYDRATE

Water is your friend. Alcohol is a diuretic, which means your fluids are being seriously depleted every time you overindulge. Coffee isn’t doing you any favors — it’s also a diuretic — but water in any form is only going to bring you relief. Don’t wait until the next day. Drink a glass of water for every glass of booze. Then chug as much as you can handle before hitting the sack. And when you wake up… you guessed it, time for more water.

If you want something with a little more zing than plain old H2O, coconut water is a fantastic alternative. Not only does it pack a tastier punch, it’s loaded with potassium to help rehydrate you fast. Skip sports drinks like Gatorade, which may help replenish your electrolytes but comes loaded with sugar — 36 grams per 20-ounce serving, admittedly far less than soda but c’mon, aren’t you done poisoning your body for a bit?

E is for EAT

As in, right before you go to bed. Don’t wait for the next morning, as most of the damage has already been done. And the food you should be ingesting in your drunken state won’t likely what your brain will be craving at that moment.

Bananas are good, as they’re full of electrolytes like potassium and sodium, the exact stuff your body is losing because of dehydration. Watermelon and pickles (maybe not together) also help restore your electrolytes. And if you’ve got a hankering for breakfast, skip the typical greasy spoon options and get yourself a big egg-and-spinach omelette, which is loaded with folate and cysteine. That’ll bump up your glutathione levels and make you start laughing, “Hangover? What hangover?”

A is for AEROBICS

Move past your mistakes, literally. The theory that you can sweat out a hangover is a myth. Remember, hydration is key to your recovery, so sweating would actually do more harm than good. But exercise, on the other hand — especially light aerobic exercise — will increase oxygen flow to your brain and improve your mood overall, which are big factors in feeling like yourself again. Don’t underestimate how a hangover can mess with your mood. Remember, alcohol is a depressant, slowing down your neural functions. So you don’t just feel lousy because your body has taken some abuse.

This isn’t to say you should hit the gym like you’re working out for the Olympics. Take it easy, as the Eagles would say. High intensity interval training will likely just leave you feeling much worse. Go for low-impact exercise, like yoga or pilates or a short walk around the neighborhood, no more than 10 or 15 minutes. Not only will the fresh air do you wonders, but the light cardio will improve your circulation and get your body functioning like it’s supposed to again.

L is for LIVE

“Live your life like you aren’t hungover,” writes Thrillist author Wil Fulton, who personally tested twenty different hangover cures. “Mind over matter. Fake it until you make it. If you stay sedentary, and let the hangover define your day, you will not overcome.”

Honestly, this may be the best advice. Not just when it comes to hangovers but life in general. Being uncomfortable is not an excuse for staying in bed and focusing on your misery. Yes, you feel like garbage, but you are not technically sick. Your body will recover in less than 24 hours. You could just stay home in a dark bedroom and moan about how miserable you feel, or you can put on your big-boy pants and tough it out.

“Time heals all wounds—including the hangover,” writes Fulton. “Go out there and do your best, kids.” Words to re-live by.

A+
a-
streaming
The Hangover